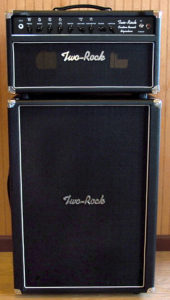 Two-Rock Custom Reverb Signature V2 (100 watt version) Folks at the time of posting this there are just 110 of these amps in existence. All Hand made by Bill Krinard and Joe Mloganoski at K & M Analog Designs this all tube tone master is one of the most sought after amplifiers by professional blues and tone freaks. I was fortunate enough to take in a show at the Gravenhurst Opera House where Peter Swanek of Peters Players was putting on with a up-coming blues star named Matt Schofield. His shear talent and incredible tone had my jaw to the ground so I made a point of checking out some information about the amp he was using which was a Custom Reverb Signature like this only the 50 watt version. I soon found out that one other player that blew me away with feel and tone (John Mayer) was also using Two-Rock amps. After some chatting with Matt Schofield I contacted the K&M guys about building me one. I can only hope I do it as much justice as Matt and John do. Powered by 4 6L6 (Tung-Sol at the moment) and 12AX7’s. I have been doing a little experimentation at the suggestion of Matt Schofield of trying some different tubes for different flavors. Currently in position 1 (clean channel) I am using RFT ECC83 NOS (NEW OLD STOCK) Tube with Halo Getter manufactured in the 1970’s and in Position 2 (drive channel) I have a Tung-Sol 5751WA NOS tube manufactured in August 1956 Military Long Plates with Horseshoe getter. and a RFT ECC81 CIRCA 1960″s to drive the reverb tank. I purchased my Two-Rock in May 2008 along with the Custom Signature SD-2-12 cabinet loaded with Two-Rocks TR12-65s These amps have a hefty $8000 price tag on them so needless to say this will be my last purchase for a while 😛 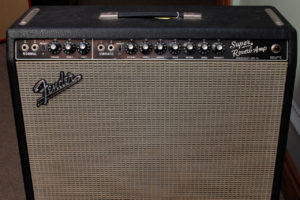 1967 “Blackfaced” Fender Super Reverb.  This vintage amp was purchased from Matt Schofield and was one of his blackface collection in Canada before moving to the Florida area of the USA.  This amp was gone over and blacfaced by Simon Law (Tech for Robben Ford, Matt Schofield, Pete Townsend among others and luthier at SVL Guitars) and matched as closely as possible to Matt’s favorite 1964 Blackface Supers that he keeps in the London England era.  This amp can be heard on some of Matt’s recordings as well as some live video from the Canada area.  I had further enhancements done to this by removing the polarity switch and death cap 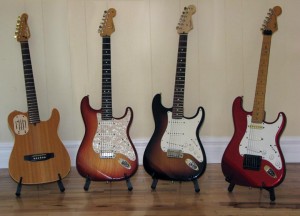 Godin Acousticaster: This is one of the early models that were hand made by Robert Godin during the companies early days. With eighteen tuned metal tines mounted under the bridge to help create that unique acoustic sound. It has a mahogany body with maple top, Rock Maple neck and Ebony fingerboard. Truly a quality instrument and one of the only guitars I bought new that gained in value from the day I bought it.

Hot Rodded Texas Special Stratocaster:
I purchased this baby about 4 years ago now and quickly became my main instrument. Built of Swamp Ash and a Sienna Sunburst finish equipped with Fenders Custom Shop Texas Special pickups for the meaty higher output and a Maple neck with Rosewood fingerboard. This guitar reeks of blues tone! This is my #1 guitar and is very near and dear to my heart. It never fails to make my toes curl or cover me with goosebumps. This is the sort of guitar for which you might consider installing a home security system or getting a guard dog to keep safe, that’s if I ever let it out of my hands! Less than 5 years old and has already seen a re-fret its played so much. 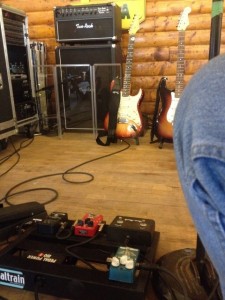 VG Stratocaster: Fender and Roland teamed up to produce this revolutionary new guitar. Equipped with stock standard USA fender stratocaster equipment and can be used as such but in addition an added Roland pickup and electronics built in to allow for 6 modes (Normal, Modeled Stratocaster, Telecaster, Humbucking and acoustic) and 5 tunings (Normal, drop D, Open G, D modal, Baratone and 12 string) I will bring this baby out when playing some slide as well as use it as a standby in case I break a string on my #1.1982 Fender Stratocaster: Heavily modded for my hard rock days and now semi-retired this guitar spent many years on the road with me. It contains Evans Eliminator pickups and a Kahler Pro Tremolo system. She sits in my closet and brings me fond memories now. 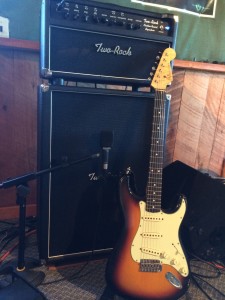 The Newest edition to my arsenal is this lovely hand crafted SVL 61″ Reserve made by Simon V. Law in the UK for his company SVL Guitars. Simon has been building these guitars for Matt Schofield for some time. Simon as well as being a great luthier is Robben Ford’s guitar technician.  Simon originally built the first 61 reserve as a clone to Matt’s vintage 1961 Stratocaster in response to an airline that lost Matt’s guitar for a period of time.  The risk of losing a 50 thousand dollar guitar prompted Simon to measure and try to copy it exactly.  After a few attempts as matt says he successfully captured the DNA of his vintage Strat.  This guitar is far above any Fender Custom Shop Stratocaster I have had my hands on and is the closest thing you will get to a 1961 Strat in both feel, tone, playability and resonance.  I had Simon lightly finish this guitar and provide some pre-aging to it not so that it looks like an old guitar but so that it will wear quickly the normal way I would wear a guitar.

This guitar has the true chime of the vintage original early pre CBS Stratocasters that even Fender cannot seem to reproduce with their custom shop vintage re-issue guitars.   At the time of writing this there are only 23 in existence.  The serial number of this guitar is “SVL R23”  And at $5300 CAD it’s one tenth the cost of an actual vintage Stratocaster with all (and I mean ALL) of the benefits of the real old vintage guitars.  Robben ford is even using one these days.  Then Matt Schofield brought it back for me on his way back to NA from the UK on tour.  Ended up going to Matt’s home to pick it up, what a treat!  As Simon says.. “He’s a good egg”.